Today, the work kicked in.

It started with another Asian breakfast (gotta love those spicy noodles!) and a long walk around the reservoir from the university we’re hosted at to the event site, which was buzzing with activity. Fortunately, a lot of that activity involved putting up tents, because the sky immediately opened up for what we now know is a classic Singaporean downpour. The longer you’re in Singapore, the more you realize just how many infrastructural details and architectural quirks are built around the assumption that there will be a flash flood basically every day. At least, I think that’s the reason that sections of every floor abruptly go two inches higher or lower for no obvious reason.

But our new braziers had been delivered! They were carefully constructed in an outdoor fabrication shop in Indonesia – bear in mind that Indonesia is so close that it’s visible – ready to be assembled. 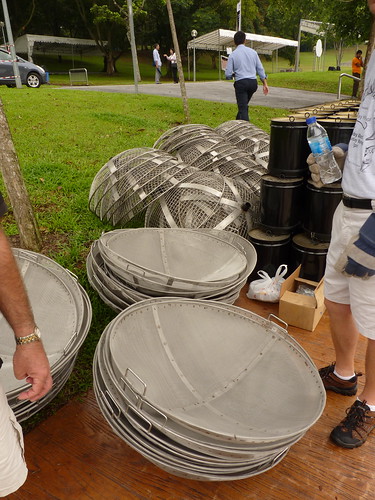 That’s when the local volunteers arrived. And they made short work of all fifty-eight new braziers. 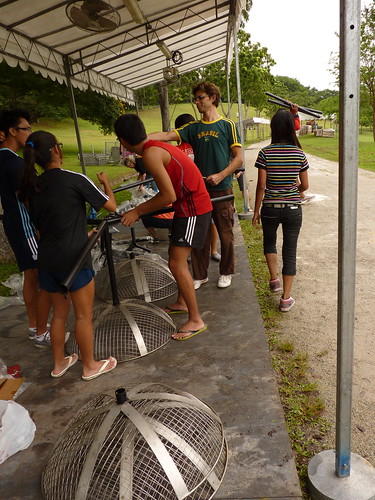 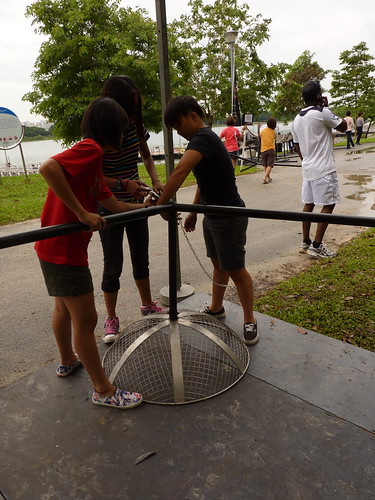 In fact, these volunteers made short work of absolutely everything. The Providence volunteers were agog, all day, at how these brilliant young people could learn and execute direction so immediately that a slight change in a plan usually meant you couldn’t explain it to them in the time it took for them to finish the previous plan, and there was at least one awkward moment when we had to make them do something twice because they’d done exactly what we said so quickly that they were down the dock by the time we noticed our own mistake a minute later.

When the brazier baskets were bolted to their stems and their arms, they were attached to three airtight cans for floatation and carefully lowered into the reservoir on ropes. 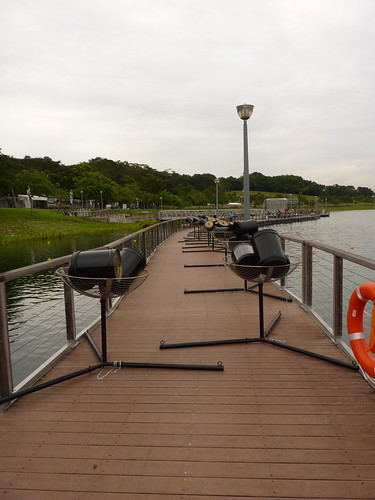 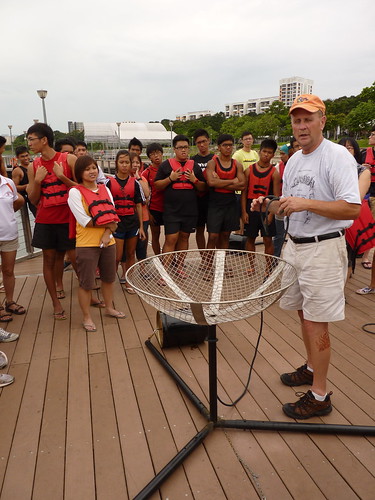 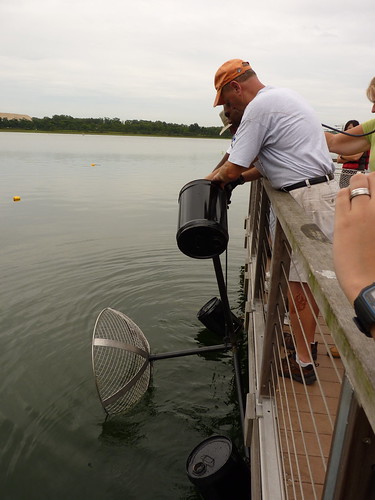 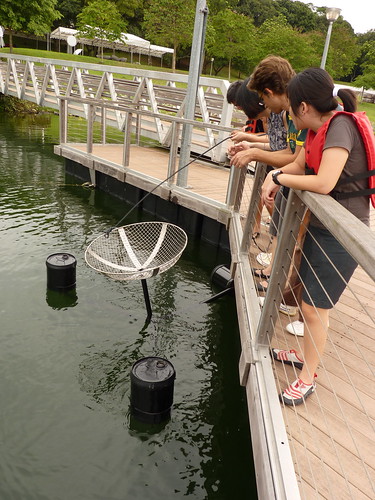 Small yellow buoys attached to anchors were already marking the spots where the braziers would go. The braziers were assembled with chain running down the center of the stem, and divers attached the brazier chain to the buoy chain. Then boats circulated, pulling the chains up hard into the brazier baskets until the buoys were forced underwater. 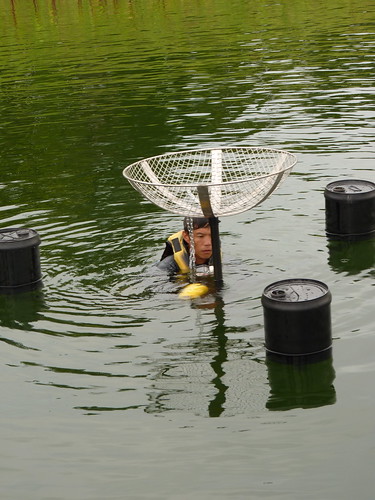 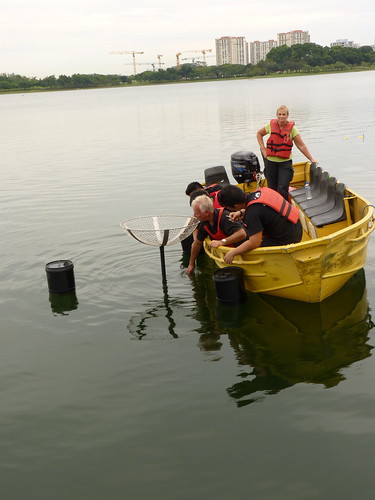 Nothing left to do now, of course, but set things on fire.

The problem of how to construct the actual bonfires here in Singapore is peculiar. For one thing, we’re holding this event on a reservoir that supplies drinking water to the city, so our usual combination of lamp oil and lighter fluid isn’t really on the docket. Also, this is a tiny country that’s mostly urban and doesn’t have much of a forest to supply firewood. And thirdly, as a going theme, did I mention that Singapore is wet?

What we had delivered, rather than the pine logs we’d use in our Providence fires, was actually reclaimed lumber from demolished buildings. 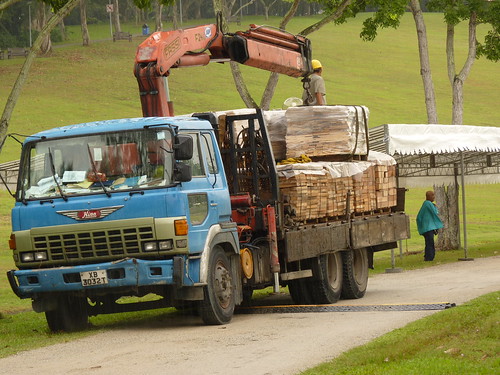 We had no idea how this was going to work. But after some struggling and experimenting, we managed to light a mini-WaterFire of eight new braziers with this strange new fuel, and I have to admit, it looked pretty familiar. 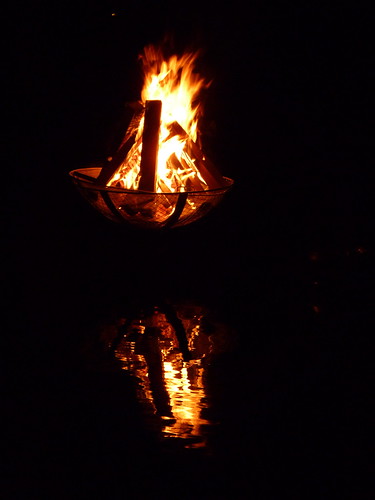 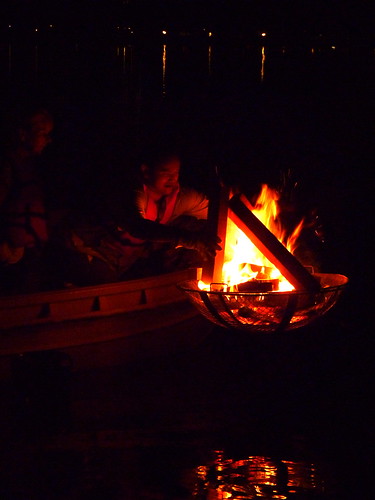 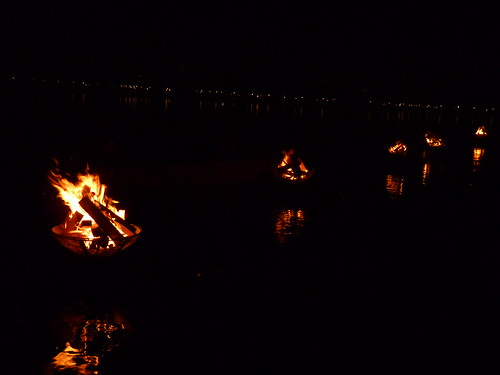